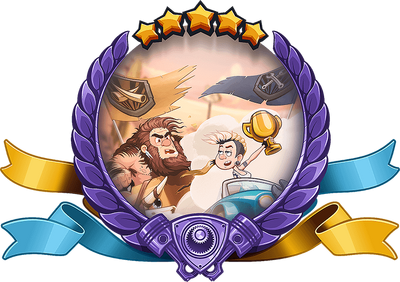 Teams were added to Hill Climb Racing 2 during the 1.25.0 update released in the first week of April 2019. The Team update is a significant online update to Hill Climb Racing 2 allowing players to create teams (Clans) containing up to 50 players and battle against other clans in a series of events. Teams will get unlocked after reaching at least the rank Gold I.

1. Team events consist of a set of different game modes. Drive all of them with the allowed vehicles to get your total score. The team event duration is 2 Days.

2. You can only use the designated vehicles during a team event. Choose carefully which one to use for each game mode (one vehicle can sometimes also be used several times).

3. Team event points are distributed according to each player's ranking in the total score leaderboard.

4. You and your fellow team members are shown in yellow on the leaderboard. The opposing team are shown in blue.

5. Your team will be competing against another randomly selected team for the event points.

6. You can attempt to improve your score up until the timer ends,but remember, so can your opponents!

7. When the time is up, you will receive a reward based on the number of event points your team has collected. More Events points means more prizes.

In order to play teams, you will need to join an existing team or create a new team. To join an existing team you can press the search 🔍 button. A list of recommended teams will be displayed and you can press on one of these teams to join. Alternatively, you can search for a team by name using the search text box. There are various resources available to assist you when finding a team including The Official Fingersoft Discord Chat and The Hill Climb Racing Subreddit.

You can also make your own team for 100 gems. When you create your own team you can leave it open for anyone to join (requirement filter) or closed, which will require a password (filter is still active). You can set a public team description and choose a team logo. Choose your team name carefully as it costs an additional 50 gems to change it after creating the team. Team names are unique. You require at least 1 people in your team to participate in a team event.

There are three levels of leadership available within a team.

A team will often perform much better when it's running well. Some key recommendations for a team are:

To unban a player you have previously banned from your team, please follow these steps:

(Note that only the team leader has ability to unban players.)

Please see the step-by-step screenshots below 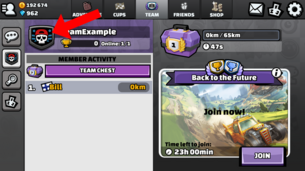 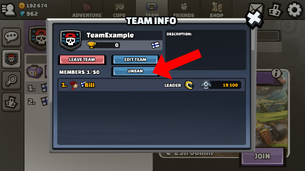 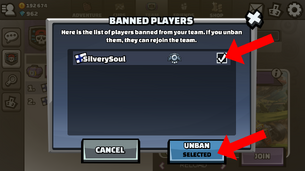 Other than using the in-game search to find a team, there are several ways to advertise your team in order to get more players or find a team more suited to what you wish to achieve.

Remember, no one likes to be spammed. Don't overdo it when advertising your team. If you want to join a team, make sure that when you contact someone you include details like how long you've been playing, how many cars you have unlocked and what levels they are, how many KM you think you could drive a week, previous team experience, etc. Simply asking "What's a team's password..." might cause your question to be ignored.

Once a team has five members, a Team Leader or Co-leader can start matching with another team that is ready to play. It can take several minutes to find a suitable match, however most of the time it's instant. Once matched, the team event will start and run for two days. After those two days, the match ends and you get the results and the prizes that come with it. You should be matched with a team that has a similar trophy range.

After competing in a team race you will receive a position based on your overall score. The maximum per track is 10,000 (so 40,000 if there are 4 races, for example). The more race points you score, the higher position on the leaderboard you will be placed. Each position has its an own number of prize points shown below. The team with the most prize points at the end of the event will win the battle. If a team scores over 3,000 points they will be eligible for all prizes. A total of 4,500 points can be distributed between 100 players. If there are less than 100 players then not all points will be distributed.

Team Prize: At the end of each team event you will be eligible to collect prizes depending on how many points your team was able to obtain.

A maximum of nine prizes can be collected and the Top Prize will be yours only if your team wins the event.

Note: From level 45 onwards there is no improvement in prizes

In the Table Below is a list of the past 3 team events. Every team event lasts one week. To see the previous events, go to Team Event Archive.